Save $180 Per Couple on a Kenya Safari with Tourcan Vacations

About Escorted or Guided Tour

Book 5 months prior to departure and save $180 per couple

Pick up your checked luggage then walk to the arrival where our Tourcan Vacations representative holding a paging board with your name on it awaits you.

You are transferred to the Kigali Serena Hotel.

Welcome to vibrant and colourful, Kigali the bustling capital city of Rwanda. It spreads out over four scenic ridges and the valleys in between, with the city centre located on one hill, and the government and administrative quarter on another. The highest hill, Mt Kigali, sits at 1 850 m (6 075 ft) above sea level. Kigali’s peaceful, tree-lined streets are clean and safe, and the city boasts a selection of hotels, restaurants, shopping centres and markets. Kigali is the perfect starting point for an unforgettable gorilla trek – one of Africa’s most fascinating wilderness experiences.

Overnight at the Kigali Serena Hotel

Check out of the hotel after breakfast and at 12:00PM depart on a city tour including a visit to the Genocide Memorial. The Kigali Genocide Memorial Centre, in Kigali, Rwanda, commemorates the Rwandan genocide in 1994. The Aegis Trust, the UK-based genocide prevention organization, was invited to establish the Kigali. The Centre is built on a site where over 250,000 people are buried. These graves are a clear reminder of the Aegis' initial commission from the Kigali City Council to develop the memorial site, where genocide victims were buried in mass graves.
This memorial centre and permanent exhibition is for the benefit of survivors and young people.

Your Kigali City Tour offers an in-depth view of Kigali, past and present, assuring that you feel the genuine heartbeat of the city. The city is divided into three districts—Gasabo, Kicukiro and Nyarugenge, which is inhabited by one million people. The Kigali City Tour begins as a historic journey through the city with a guided tour from the first modern building from which the capital city was first founded, to the rapidly growing neighborhoods that are changing the face of the city. Kigali is one of the friendliest, cleanest and safest of Africa’s cities attracting numerous visitors and investors to the capital. Kigali City was founded in 1907 as a small colonial outpost by Dr. Richard Kandt, the first German colonial resident of Rwanda. His residence at the base of Mount Jali and Mount Kigali in the heart of the city has been converted into the Natural History Museum in honor of Dr. Kandt’s work, and is one of the first stops on the tour.

Along the tour, we will pass by Kigali’s older commercial “quartiers”, business and residential areas, visit historic sites commemorating the 1994 Tutsi Genocide, take a guided tour within the Gisozi Genocide Memorial, and learn about the city’s diverse neighbourhoods and local attractions.
After, continue to the Hotel De Mille Collines for a lunch. After the tour depart Kigali and travel to Volcanoes National Park (Parc National des Volcans). The journey to the North goes through the beautiful terraced hillsides that display Rwanda's landscape. Arrive Ruhengeri, the base for Gorilla trekking at the Parc National des Volcans. The town itself is located only 25km from Uganda boarder, is relatively a small city of about 70,000 people. The constant flow of humanity is quite remarkable. The Town has great views of the surrounding volcanoes. People are very friendly here and although a former Belgian colony (and thus French-speaking), many people speak English as well.
Check into the hotel.

Dinner is included at your accommodation tonight. 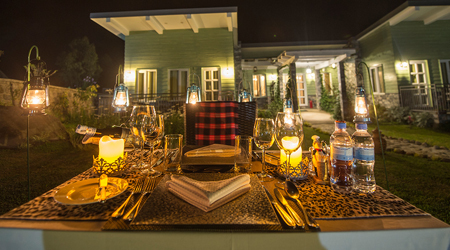 Early breakfast.
0600 hrs: Transfer to the Volcanoes National Park HQs for the gorilla trek.
0700 hrs: Briefing by your trackers then drive to the trail head for the start of your amazing Gorilla Tracking adventure.

Your trek again starts in the cultivated foothills of the Virunga’s offering stirring views in all directions. When it enters the national park, trekkers will be immersed in the mysterious intimacy of the rainforest, alive with the colorful bird calls, chattering golden monkeys, littered with fresh spoor of the mountains’ elusive buffalo and elephant. Through gaps in the canopy, the magnificent peaks are glimpsed, among the highest in Africa yet easily accessible, beckon an ascent.

Weaving through overhanging vines, moss-covered hagenia trees and giant lobelias that thrive in the tropical climate, our experienced trackers, who have spent their entire lives in or close to this forest, soon bring us up close with one of the Gorilla Families.
Upon sighting the gorillas, you will stay with them for a magical hour as they go about their daily life, feeding, playing, resting; raising their young. Coming face to face with a giant silverback must truly be one of the greatest wildlife experiences on earth! After the trek, re-join your driver Guide for a transfer to Amakoro Songa Lodge.

Dinner at the lodge. 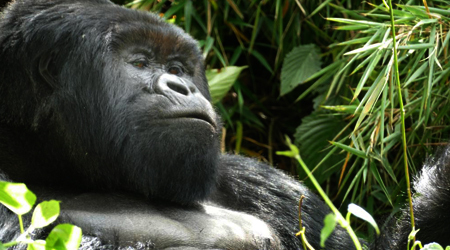 Enjoy all meals at your Lodge. Spend the day at leisure.

Check out of the lodge after breakfast and depart from foothills of the volcanoes on a scenic drive back to Kigali.Everything and everywhere, sheer green and hanging on the hills; Rwanda truly - land of a thousand fertile green hills. (2.5hrs).

Transfer to the Kigali Serena hotel for check-in and overnight. 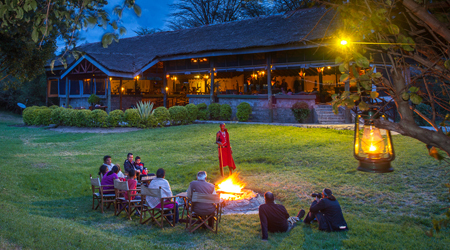 Check out of the hotel after breakfast and you will be transferred to the Kigali airport for your flight to Nairobi (airfare is extra).

On arrival at Jomo Kenyatta airport, clear customs and immigration then you are warmly met by a Tourcan Vacations representative. You will be transferred to Wilson Airport for your Air Kenya flight to the Masai Mara.Please note baggage allowance for this flight is 15kgs inclusive of hand luggage and must be in soft bags.

On arrival at Masai Mara (Olkiombo Airstrip), you will be met and transfer to the camp with a (short) game viewing drive enroute.Enjoy an afternoon game viewing drive in this vast and expansive reserve teaming with game. Be on the look-out for the 'big five' Mara is famous for and the most sought after in the early 20th century when Kenya was a hunters' paradise. Killing any of them game one some class, pride, heroism. These include the lion, Cape buffalo, the savannah elephant, black rhino and the elusive leopard. The vast savannah grasslands stretch as far as the eye can see is home to impalas, maasai giraffes, waterbucks, warthogs, Thompson & grants gazelles, topis, resident wildbeestes among many others. Later in the evening return for dinner and overnight at your lodge.

A small intimate Bush Camp of 6 Bedroom Tents each measuring approximately 54sq. metres with amazing fusion of modern African décor. Each tent has a four poster King Size Bed with a 180º view on to the Mara River with all the amenities such as hot/cold running water, flushing toilet, bathtub and an outside shower with a view.Nature is undisturbed and the camp grounds are kept ‘as found’ to allow one to be completely immersed with the surroundings. There is an astonishing view of the confluence of Mara and Talek Rivers and home to a huge population of hippo and crocodiles. The camp is unfenced and is designed to allow the movement of animals through the grounds. 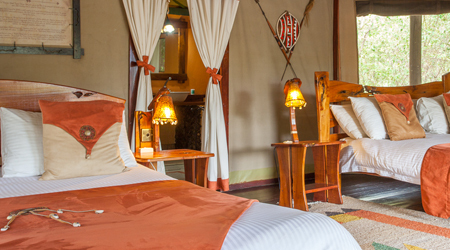 Enjoy breakfast then proceed on a full day of game viewing drives & adventure. Be on the look-out for the big five that Maasai Mara is famous for. These include the lion, savannah (African) elephant, the Cape buffalo, the leopard and the black rhino. We may even be so lucky to witness a leopard or a cheetah sprint and make a kill! We return back to the camp for dinner and overnight.

Depart Nairobi. Morning at leisure. Enjoy an early lunch and transfer to the airstrip for your Air Kenya flight to the Nairobi. You will be met on arrival and transferred to Jomo Kenyatta airport for your homebound flight.

SAVE $150 Per Couple on Exotic Fiji with Tourcan Vacations

SAVE $75 per couple on a Bali Bonanza with Tourcan Vacations